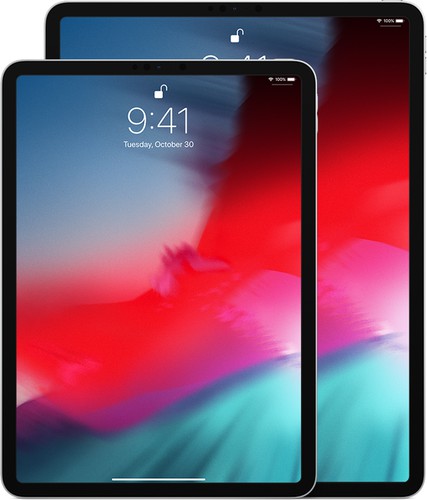 If you just need or want an iPad, get an iPad. Apple has good ones, compatible with the original Pencil, going for just a few hundred bucks now. If you need more, something that combines raw power and absolute portability better than anything else on the market, then get an iPad Pro.

Apple’s iPad Pros (2018) are such powerful mobile computers, you’ll need to change the way you work to truly get the most out of them. But the thing is, you’ll want to.

There’s no doubt that the iPad Pro for 2018 is a stunning device in various ways. That includes the price which is even higher than last year, with the older model still on sale at the same price.

We love the new design with it svelte shape and impressive screen-to-body ratio making older devices look instantly dated. Even if you’re new to the gesture era with no Home button, you’ll quickly get used to it.

Specs and performance are excellent across the board. The question, as is often the case, is whether you can afford the tablet.

The new iPad Pro is the best tablet I have ever used. But the same can be said about each year’s release. Apple has worked for years on the technology in the new iPad Pro, from Face ID to the Liquid Retina display to the wireless charging required for the new Apple Pencil – it’s all impressive tech.

At the risk of sounding a little too enthusiastic up front, I can sum up the Pro’s design in a single word: Wow.

Don’t be fooled by its new, even more minimalist design: Apple’s revamped 12.9-inch iPad Pro is overkill, plain and simple. We have a few things for thank for that, like the absurdly fast A12X Bionic chipset (which actually runs faster than some of the full-blown PCs in our office) and the fact that you can now pay for up to 1TB of onboard storage. And let’s not forget Apple’s decision to include a USB-C port instead of its classic Lightning connector.

It’s the first iPad we’ve ever tested that could actually potentially replace a traditional computer in someone’s life. That said, shortcomings in iOS and a lack of optimized software mean that this iPad’s best days are still to come.

I tried to live the nothing-but-iPad life, and I failed. That’s not to say that you will, but this kind of machine will shine brightest with the right people and the right circumstances.

The iPad Pro is one of the most powerful computers you can own. It could be the best PC, too. Or better than a Mac. For now, it still has to settle for being the best tablet money can buy.

By every measure I can think of, these are the best, most powerful, most capable iPads I’ve ever used. They put other tablets to shame.

No laptop can emulate the drawing capabilities of the Apple Pencil, or feel as natural to hold and use with touch. It’s not even close. The iPad Pro has a clear lead over PCs there. As a more traditional work PC, it sometimes struggles.

Apple’s 2018 iPad Pro is an impressive workhorse of a tablet, with stunning performance and tablet-optimized iOS apps that make it a fantastic entertainment machine. As the “Pro” moniker suggests, this is undoubtedly a tablet for professionals.

Should you buy it? Yes. The iPad Pro is undoubtedly the best tablet you can buy, though it will put a dent in your wallet.

The iPad continues to be a great media & entertainment device of impressive capabilities and portability. If you know exactly how it’s going to fit into your lifestyle, then this latest edition will surely not disappoint. Should you reach for the 1 TB version, though? We’re not so sure. The 256 GB model will get you a long way and will not break the bank, so that may be this year’s most value-packed option.

Is the new iPad Pro a stunning engineering achievement? Without question. Has Apple once again produced mobile hardware that puts the rest of the industry to shame when it comes to performance, battery life, and design? Yep. Is the iPad Pro the best, most capable iPad ever made? It certainly is. But you know what? It’s still an iPad.